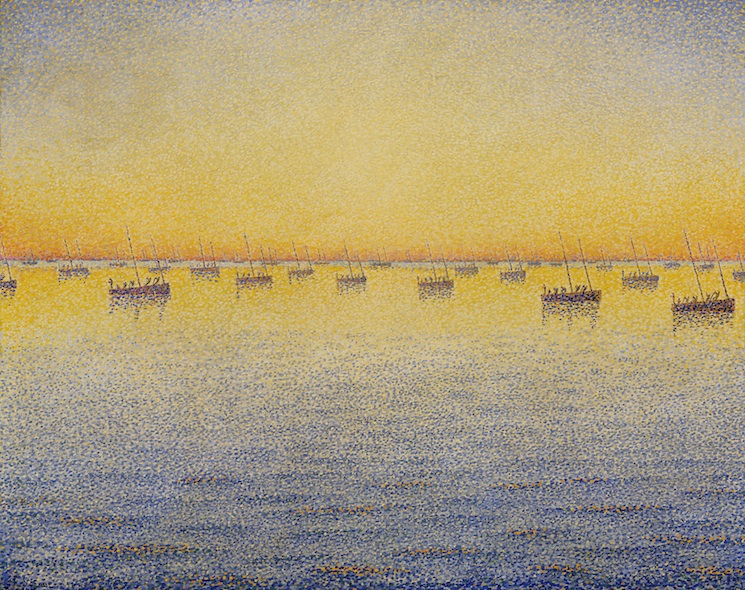 Paul Signac spent much of May 1891 at the Breton port of Roscoff where his new 11 metre yacht was being built. In August he sailed the Olympia, accompanied by his future wife Berthe Roblés,  round the western capes of Brittany to Concarneau on the south coast where they were joined by his friend, the critic Félix Fénéon. Signac took part in various regattas along the coast but also completed five paintings often using his new craft moored from various vantage points. This is perhaps the most striking work.

In a letter to Fénéon after he had returned to Paris, Signac wrote ‘Have begun another setting sun, or rather already set. The water, the sky and a hundred boats before the wind, on the horizon, sardine fishing’. The simple composition – sky, a foreground gentle swell and the line of boats against the fiery sunset – create a sense of peace and calm. The use of a restricted palette of blue, yellow and orange is exactly what one might expect from a marine sunset but of course these complementary colours also concurred with Neo-Impressionist colour theories.

The other paintings completed at Concarneau are concerned with the same subject matter but are seen at different times of day and from differing distances. All five paintings were exhibited at Les XX in Brussels in February of 1892 – the use of musical subtitles was popular with Symbolist artists at the time, seeing a link between colour and musical harmony.