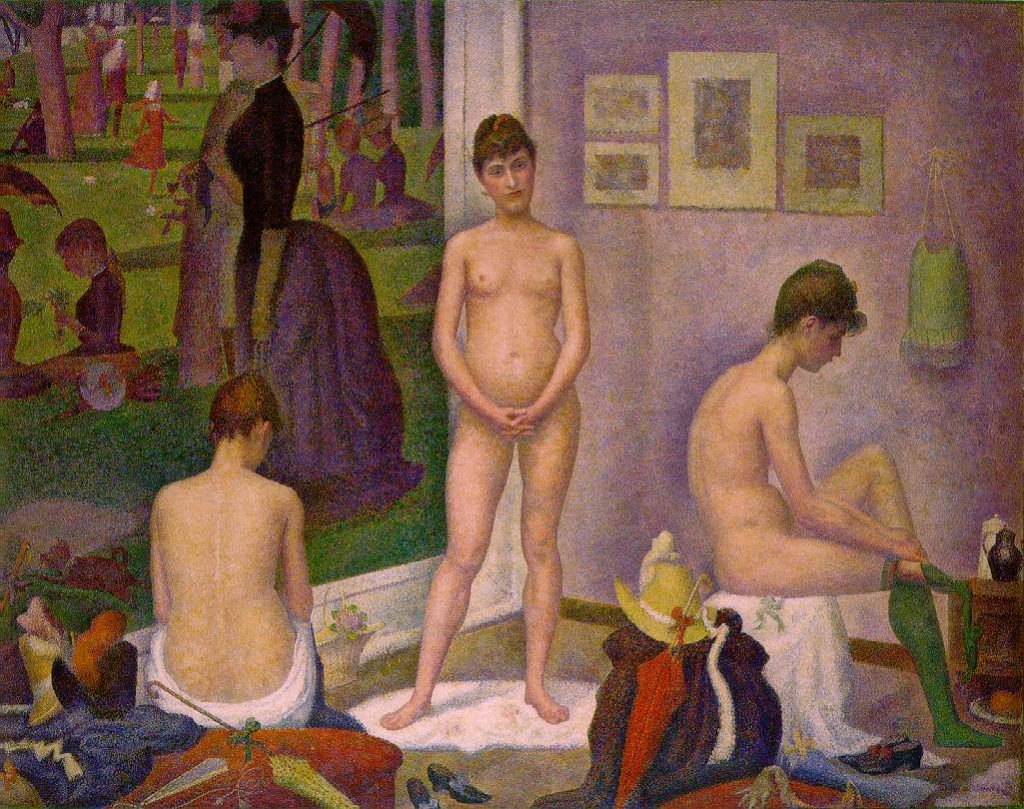 The left half of this painting is taken up with a substantial portion of A Sunday on the island of the Grand Jatte, so we are looking at a corner of Seurat’s studio as it was in 1886, (before the Grande Jatte left his studio) – the year that he began work on Poseuses. The edge of the original white frame of the Grand Jatte (it now has a pointillist frame added by Seurat at a later date), where the two walls of the studio meet, marks the exact centre of the painting.

Three naked models occupy the somewhat narrow space between the picture plane and this triangular meeting of wall and painting. The central figure, engages the viewer with a direct stare, standing with her hands clasped strategically in front of her. She is flanked by two figures; one to the left, in front of the of the Grand Jatte, sits with her back to the viewer, another occupying the right hand third of the painting is seen in profile, pulling on a pair of green stockings. But are we looking at three models or, as seems more likely, three iterations of the same woman (possibly in the process of undressing, posing and dressing) The physical similarities of the three figures surely confirm the latter assumption – especially the colour and arrangement of their hair – a small part of the red hair grip of the central figure can just be seen as the head of the right hand version bends down to deal with her stockings. The white towel-like object is present for each pose and the two hats look very similar. But Seurat keeps us guessing; the other feminine accoutrements arrayed within the studio introduce an element of doubt. The colour of the two parasols and the bows embellishing the two pairs of shoes are dissimilar.

These fine clothes also suggest a strong link between the nude figures in this painting and grandly dressed denizens of the Grande Jatte, in particular the dress of the large female figure visible in the Grande Jatte detail and the discarded dress associated with the seated model in profile arranging her stockings. Seurat is juxtaposing this interior with the outdoor scene of the earlier showstopper. The overt link with the earlier painting may also possibly relate to the criticism of the Grande Jatte from some commentators that the pointillist technique produced stiff figures. Here he demonstrates that his technique could produce lifelike nudes.

The three figures are seen in different poses, one from behind, one from the front and the third in profile. It has been suggested that this may be a reference to the long tradition of the Three Graces, a subject much portrayed by artists such as Botticelli, Lucas Cranach, Raphael and Rubens where the three female figures are positioned as a way of seeing the female nude from different viewpoints.

James Ensor: The Entry of Christ into Brussels in 1889, Antwerp, Royal Museum of Fine Arts