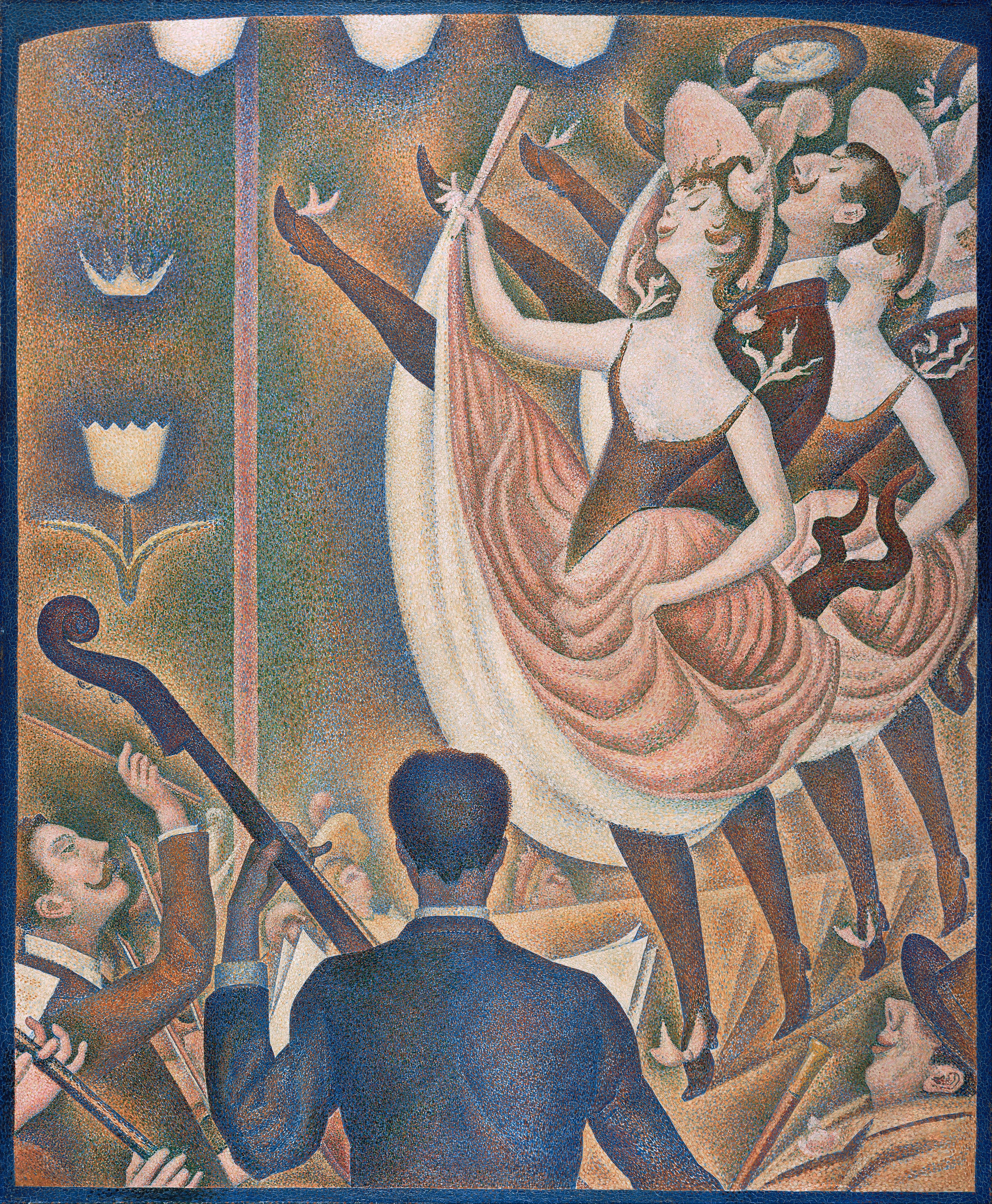 This painting was inspired by visits to a cabaret, La Divan Japonais and might be considered as complementary to Parade du Cirque of 1888,  illustrating Seurat’s interest in places of entertainment. While Parade du Cirque features a ‘taster’ designed to entice people to experience the full show, this painting takes you past the entrance to see what’s on offer inside. Le Chahut was a form of can-can, a very popular suggestive dance in which female dancers kicked their legs rhythmically to the beat of raucous music. Seurat shows the performance in full swing with the dancers legs extended and the women holding their skirts in such a way as to afford the audience a glimpse of what lies beneath. The erotic effect of the dance on male members of the audience is made plain when we notice the leering spectator in the lower right corner of the composition who holds a suspiciously phallic cane. Sexual titillation is enhanced by the fact that during the performance the dancers rhythmically conceal and then flaunt the line of their legs – the angles of which is echoed by the neck of the bass and the wind instrument in the bottom left.

The stage floor bears an uncanny resemblance to later cubist techniques. The shoes and legs of the dancers are perhaps throwing shadows but if so it might be expected that the shadows would fall in a different direction – away from the auditorium lights.

The considerable emphasis on these rhythmic repetitions, including the lights surrounding the stage as well as the bows of the orchestra and the stylised ribbons attached to dancer’s shoes and bodice straps, was in response to the ‘psychophysical’ theories of Charles Henry, a polymath whose interests ranged from mathematics and optics to aesthetics. His unsubstantiated hypothesis regarding the psychological effects of colour and line led him to pronounce that differing emotions could be engendered by different colours and indeed by the direction of lines. He held that lines which moved in an upward direction induced joy and conversely those moving downwards cause sadness.

Another, less arcane, influence was the work of Jules Chéret whose posters for places of entertainment could be seen everywhere in Paris. Seurat owned a number of his posters – he was obviously attracted to Chéret’s exaggerated forms and startling use of colour.