Pierre Puvis de Chavannes was without doubt one of the most influential artists of the late nineteenth century but he is a difficult artist to categorise or pigeonhole. This is part of his appeal. A personal fortune allowed him to follow his own path, freed from the necessity to compromise his style in order to attract commissions and able to weather the storms of critical condemnation. He was both fêted and castigated by the critics: attacked by many conservatives for his restricted palette, his disinterest in realism and his poor draughtsmanship, he was praised by other traditionalists for delivering French academicism from the stultifying clutches of ultra conservative painters such as Bouguereau and Cabanel. At the same time he was associated with modernity and praised by progressive opinion for his distinctive, decorative approach in which perspective often played a subordinate role to the importance of the surface plane. He was able to bestride both camps.

Puvis was famous in the late nineteenth century for his huge decorative murals and oversize canvasses which combined simplicity of form and colour with monumental scale. He was a great admirer of Piero della Francesco and the art of the early Italian renaissance and this led him to use flat expanses of colour in emulation of fresco. This somewhat dull tonality together with his use of strong horizontals and verticals give his output structure and a feeling of calm.

The majority of his compositions present us with an Arcadian paradise peopled with figures who are lost in silent contemplation. The critic Emile Cardon, responding to one of Puvis’ works displayed at the Salon in 1881 wrote that it ‘… left no one indifferent… all I know is that it is imprinted with an irresistible and poignant poetry to which one submits and which escapes all analysis and reason.’ Later, in another review he notes that Puvis generates ‘a vague and untranslatable melody, which penetrates the soul and escapes brutal analysis’. Puvis’ paintings refused to fit into easy categories. Most of his pictures have no ‘subject’, rather they create a mood, an evocation of a timeless idyll and this is why he was was adopted by the Symbolists; he was seen (along with Gustave Moreau  and Edward Burne-Jones) as a harbinger, heralding a movement of writers and painters who were characterised by an interest in the irrational and the ambiguous, by a distrust of realism and an enthusiasm for dreams and visions. This sensibility was shared by the Neo-Impressionists who were also deeply indebted to Puvis as were Picasso and Matisse. 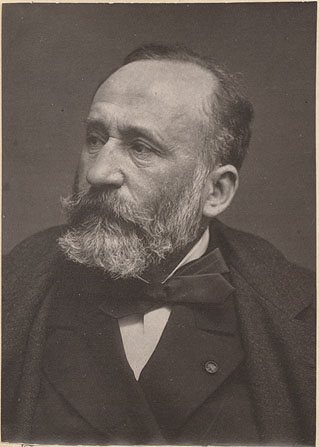