Les XX and Neo-Impressionism in Belgium

The exhibition society know as Les XX (Les Vingt) was established in Brussels in October 1883 by 11 founding members who then invited a further nine to take part in their first exhibition in 1884, making a membership of twenty. They were perhaps the most avant-garde group of artists exhibiting in Europe at that time. James Ensor, the symbolist Fernand Khnopff and two future Neo-Impressionists, Alfred William Finch and Théo van Rysselberghe were among the original eleven. The lawyer and critic Octave Maus was elected as secretary for the society, responsible for organising exhibitions. Maus and his fellow lawyer Edmond Picard had founded the Belgian periodical L’Art moderne in 1881 and the magazine became the mouthpiece and defender of the group against constant attacks from conservative critics. In 1887, in response to Picard’s deliberate stirring of controversy, a number of the  conservative members of the group resigned and were replaced by more radical artists including Paul Signac, Georges Lemmen, Jan Toorop, and Henry van de Velde.

Maus, van Rysselberghe and the poet and critic Emile Verhaeren formed the core guiding coterie inviting emerging and international artists to exhibit at Les XX. They were not concerned with promoting any one group above another. The list is impressive: Gauguin, Whistler, Sargent, Odilon Redon, Cézanne, Monet, Renoir, Toulouse-Lautrec, Rodin, Walter Crane. Vincent van Gogh was invited to send some pictures for the XX exhibition in 1890. He sent two Sunflower canvasses and four landscapes. (The only picture sold by van Gogh in his lifetime was purchased by the painter Anna Boch – a member of Les XX). The group also hosted concerts by Debussy and Fauré among others as well as lectures by the poets Mallarmé and Verlaine. The group were always looking for new ideas and emerging artists and there is no doubt that they played a major role in the development of Neo-Impressionism.

It was Emile Verhaeren who persuaded the committee to invite Georges Seurat to exhibit in February 1887. Seurat submitted six canvases depicting scenes on the Normandy coast and his masterpiece An Afternoon on the Island of the Grande Jatte which duly caused a sensation. Camille Pissarro also sent paintings that year and Signac, who attended the opening in Brussels with Seurat, wrote to Pissarro that ‘I left Les XX exhibition exhausted: an enormous crowd… a great success for us: Seurat’s canvas was invisible, impossible to approach – that’s how enormous the crowd was.’ Verhaeren wrote many articles in support of Neo-Impressionism and Symbolism – he met Signac at the 1887 Les XX exhibition and later stayed with him in Paris. This was the start of a close relationship between Verhaeren, Signac, van Rysselberghe and Henri Edmond Cross. 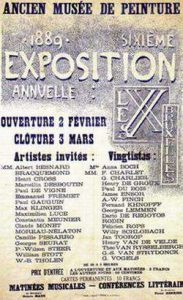