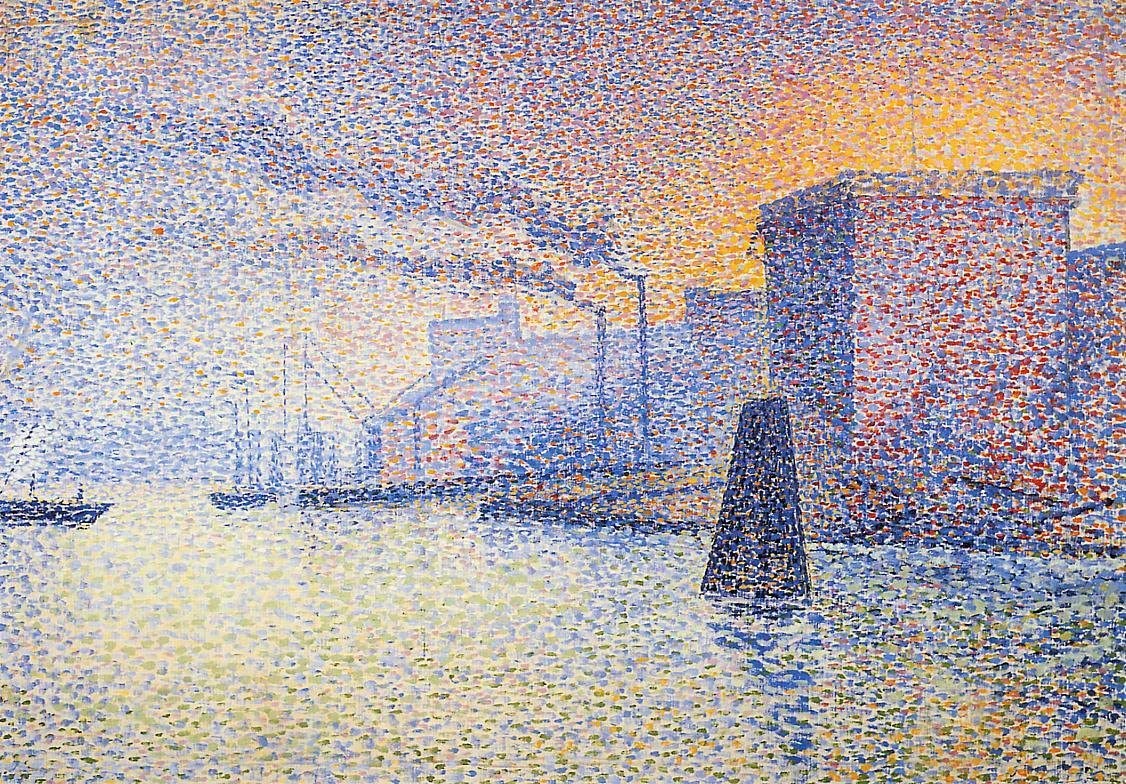 Many European artists came to London in the late 19th and early Twentieth centuries, in part attracted to the atmospheric conditions which prevailed at the time. The industrial nature of many stretches of the Thames and the huge size of the British capital, heated and powered by coal, produced the famous fogs painted by Monet and others – memorably Monet’s misty Impression, Sunrise responsible for hostile critics pinning the pejorative appellation to the ‘Impressionist’ group. So Georges Lemmen was one of a long list of artists who came to London to experience the mega-city and its unique atmosphere (with a population of roughly six million inhabitants in 1891, more than three times the size of Paris).

Here, Lemmen has eschewed the set piece views such as the Houses of Parliament, and chosen an industrial reach of the Thames (as indeed Signac chose industrial sections of the Seine). Two central chimneys belch smoke, blown on a stiff breeze across the river; they appear to be situated by a wharfe which is approached by a vessel from the left. Other craft can be seen in the vicinity. Behind a squat tower-like structure the sun sets.

The upper half of the painting is a glorious example of the pointillist technique and neo-impressionist colour theories. The dabs of orange which so beautifully evoke the aura surrounding a setting sun, spread across the sky and are gradually matched with neighbouring points of blue and violet to create a vibrant evocation of an evening sky. In part this pulsating passage is so attractive to the eye because neo-impressionist theory points out that the Orange / Yellow spectrum and the Blue / Violet spectrum are complementary colours; that is, they oppose each other on a colour wheel. But the proximity of the dabs also encourages the theory of optical mixture within the eye (see Applying Science to Art).

Whatever the theories behind the painting, this is an exceptionally evocative picture, transforming an essentially industrial motif into an object of great beauty.