Emile Verhaeren was a Belgian Symbolist poet, playwright and critic who trained as a lawyer but soon abandoned that path to dedicate his life to literature, criticism and poetry. From 1880 he wrote for l’Art Moderne a journal publishing articles on art and literature based in Brussels and from 1883 he reviewed art exhibitions for the magazine while also writing for other publications such as La Jeune Belgique and La Société Nouvelle. He supported the group known as Les XX and championed young Belgian artists such as James Ensor. He produced plays and many collections of poems a number of which were inspired by his interest in the visual arts as well as his fight against social injustice. His works were translated into more than twenty languages.He formed lifelong friendships with Théo van Rysselberghe and Paul Signac.

In 1898 he moved to Saint-Cloud, near Paris. At the outbreak of the Great War he moved to England, where he was awarded  honorary degrees from a number of universities. He died as the result of an accident at Rouen station in 1916. 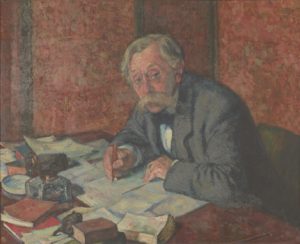