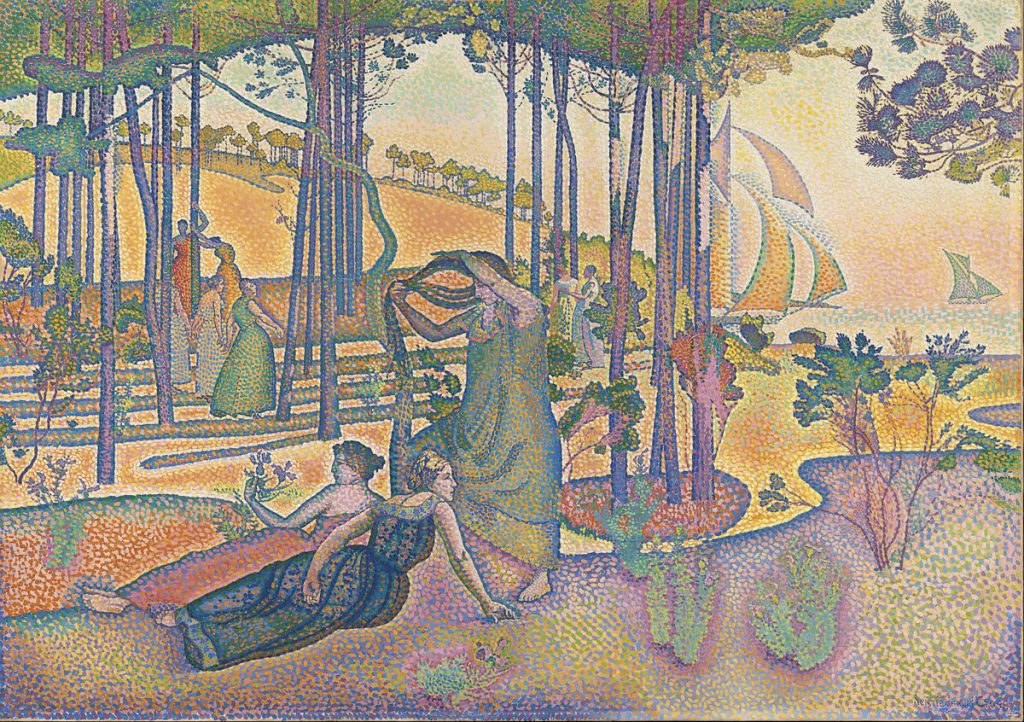 A company of women linger among trees which emerge from the sandy delta of a shallow stream. In the foreground two of the group lie on the bank, one gazing out towards a sparkling sea, the other languorously studying a plant; a third stands nearby teasing out her impossibly long hair, reaching, it seems, to the ground. Other women move under the elegantly attenuated trunks of the coastal copse, delighting in the cooling air. We can only surmise what passes between them during their promenade in the golden hour of the waning day. Appearing round the headland, a sleek yacht comes into view – another, smaller craft can be seen near the horizon – both under full sail and making good headway in a favourable breeze. We are witness to a timeless moment in a dreamlike Eden. But this is no unattainable Arcadia, rather it is a depiction of an idyll inspired by the beauty of a place well known to the artist.

In 1891 Cross moved permanently to the south of France where he settled in a small hamlet, overlooking the sea, on the Côte d’Azur. The move to warmer climes was necessitated by a debilitating arthritic condition which had aged him prematurely. However, despite the pain associated with this condition, Cross was obviously a delightful man. One of his many friends wrote that ‘In Cross’s company, confidence made the shyest and most reserved as cheerful and talkative as children’. Cross was quickly followed to the south by Paul Signac who rented a house near his in the (then uncelebrated) village of Saint-Tropez. The two men, who enjoyed a very close relationship, delighted in the special qualities of the Mediterranean light, the luminosity of which they captured using their particular brand of neo-impressionism to produce a scintillating surface of small blocks of colour. Here, on the shores of the Mediterranean, they created their vision of a contemporary Eden.

The Evening Breeze is rooted in the tradition of the timeless idyll which had, during the latter part of the 19th century, been exemplified by the output of Pierre Puvis de Chavannes but originates in classical ideas of an unsurpassable state of harmony which had once been attained in a distant past but is now the preserve of a melancholic nostalgia. Puvis de Chavannes had been fêted for his large scale public murals and canvasses, such as his celebrated Sacred Grove for the Musée des Beaux-Arts in Lyon, and his work had attracted a very wide range of admirers from deeply conservative academicians to Seurat and later, Picasso.

Puvis’ ideas may have been a starting point but Cross’s technique could hardly be further from Puvis’ flat areas of muted colour. There are also passages in The Evening Breeze which reflect the novel influence of Art Nouveau especially in the sinuous patterns of branches and foliage in the upper part of the composition.

Cross and Signac shared a passion for anarchism and at the time that Cross was painting this picture, Signac was also engaged in the representation of his own socio-political utopia – a huge work set in Saint-Tropez entitled In the Time of Harmony to which a challenging subtitle was added – The Golden Age has not Passed; It is still to come. Signac’s vast work is much more overtly political than The Evening Breeze but Cross was engaged in a similar enterprise; we need not look to the past for ideals of harmonious beauty and social ease, we can attain our own Golden Age here and now.