Henri Edmond Joseph Delacroix was born to a French father and a British-born mother in Douai, northern France. In 1865 the family moved to Lille and a year later, at the age of ten his talent was recognised by his father’s cousin Dr. Auguste Soins who financed lessons with the leading portraitist Émile Carolus-Duran.

In 1878 he enrolled in the École de Dessin et d’Architecture in Lille where he was taught by Émile Carolus-Duran who later became a celebrated portrait painter in Paris. He moved to Paris in 1881 at which point he anglicised his name to Cross in order to avoid confusion and with the famous Romantic artist Eugène Delacroix.

In 1884 Cross was involved in the founding of the Société des Artistes Indépendants where he met Georges Seurat, Paul Signac, Charles Angrand and Albert Dubois-Pillet. However he did not immediately follow their stylistic lead – it was 1891 before he exhibited his first pointillist piece, a large portrait of his future wife Irma Clare France at the Salon des Indépendants of that year. In the same year he moved permanently to the South of France in an effort to try and alleviate his chronic rheumatism which had aged him prematurely.However, despite the pain associated with this condition, Cross was obviously a delightful man. One of his many friends wrote that ‘In Cross’s company, confidence made the shyest and most reserved as cheerful and talkative as children’. At first he rented a house in Cabasson but then built a house in the hamlet of St Clair near Saint-Tropez where he lived for the rest of his life. In 1892 Paul Signac arrived in the (then uncelebrated) village of Saint-Tropez in his yacht Olympia. He also decided to settle on the Mediterranean coast and purchased a house in the town not far from his friend Cross. The two men, who enjoyed a very close relationship, delighted in the special qualities of the Mediterranean light, the luminosity of which they captured using their particular brand of neo-impressionism to produce a scintillating surface of small blocks of colour. Here, on the shores of the Mediterranean, they created their vision of a contemporary Eden.

Cross continued to exhibit in Paris and also at Les XX in 1889 and 1893 but from now on his output reflected his delight in his surroundings and the Mediterranean idyll became a central feature of his oeuvre. In paintings such as his masterpiece The Evening Breeze one can see the influence of Symbolism and the decorative impulses of Art Nouveau. In 1904 Cross and Signac were visited by Henri Matisse who was inspired by their experiments with colour.

1881 Moves to Paris. To avoid any confusion with his famous namesake Eugène Delacroix, he adopts an shortened, anglicised version of his name.

1884 Cross, together with Seurat, Signac and Charles Angrand, helps to found the Société des Artistes Indépendants.

1891 Fully adopts the Neo-Impressionist technique when painting a portrait of his wife (now in the Musée d’Orsay). Moves to the Côte d’Azur.

1892 Settles in Saint-Clair, a hamlet near St Tropez, where he lives for the rest of his life.

1896 Contributes a lithograph to the anarchist publication Temps nouveaux.

1905 A one-man show of his work is mounted at Galerie Druet. 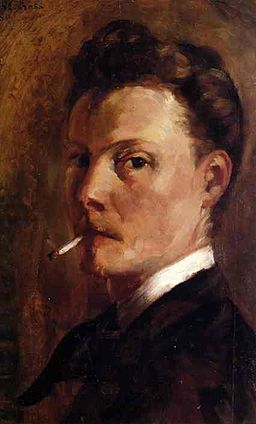