Born in Paris in 1846, he spent his early life in Toulouse. A self-taught artist, he attended the French military academy at Saint-Cyr, served in the Franco-Prussian war and rose to to the rank of captain in the Garde Republicaine in 1879. He had already exhibited work at the Salon in 1877 and 1879 although his submissions were refused in 1880.

He was a founder member of the Société des Artistes Indépendants taking on the  responsibility of writing the statutes of the society and chairing the organisation until his death. It was through his continuing administrative work on behalf of the Indépendants that he met Seurat, Signac, Henri-Edmond Cross and Charles Angrand in early 1884. His enthusiasm for the cause led him to immerse himself in research into the science of colour perception and he was also able to use his contacts as a Freemason to find exhibition space.

His avant-garde proclivities came to the attention of his military superiors who warned him to desist from artistic activities. However he continued to paint and this may have been a factor in the decision to retire him from the army in the summer of 1887. In 1888 his retirement from the army was rescinded; he was invited to exhibit at Les XX in Brussels and he had a one-man show at the Revue Indépendante. In 1889 he was posted to Le Puy-en-Velay. He died in August 1890 after contracting smallpox.

1871 While serving in the Franco-Prussian War he is captured by the Germans and held as a prisoner of war in Westphalia. After his release he resumed his duties in the army.

1884 He is a founder member and Chairman of the Société des Artistes Indépendants. In a effort to hide his art-related activities from the military, he adds his mother’s maiden name to his and starts to sign his paintings Dubois-Pillet.

1886 He is ordered to discontinue exhibiting but continues to do so.

1889 Posted as commander of the gendarmerie in Le Puy-en-Velay. 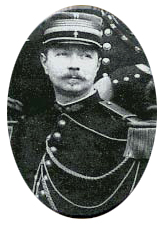 Paintings
The Banks of the Marne at Dawn